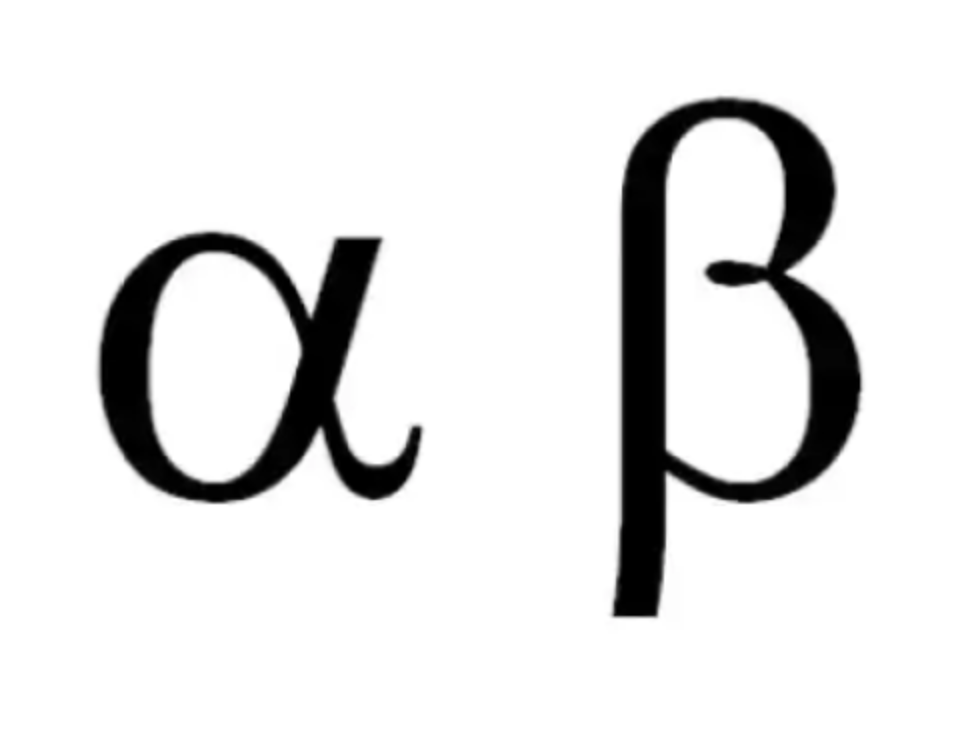 When it comes to trading and investing, there are two main types of strategies: alpha and beta.

Smart beta is a combination of the two involving harvesting beta in a more efficient way.

Alpha strategies seek to outperform the market by making investment decisions that are not based on simply matching the market.

Instead, alpha strategies are about finding opportunities that the market has not yet recognized.

In markets, the consensus is baked in the price. So, generating alpha (returns in excess of a representative benchmark) involves recognizing something about prevailing market pricing that are not reflecting what’s likely to transpire.

This can be done through individual stock picking (what stocks are better than others), sector rotation (overweighting certain sectors relative to others), shorting (betting what will do poorly or underperform other assets), or other means.

Determining the alpha generated in a portfolio will depend on the benchmark.

A portfolio that focuses on stock picking and stock trading might compare itself against the S&P 500.

A fixed income portfolio that focuses on investment grade corporate debt might benchmark itself against something like LQD (Investment Grade Corporate Bond ETF).

Jensen’s alpha is a statistical measure that attempts to quantify the alpha in a portfolio.

It does this by calculating the difference between the expected return of a portfolio and the return that would be predicted by using the Capital Asset Pricing Model (CAPM).

The capital asset pricing model is a model that describes the relationship between risk and expected return, and is used to calculate the beta of a security or portfolio.

If the alpha is positive, that means the portfolio has outperformed its benchmark.

A negative alpha means the portfolio has underperformed the benchmark.

Hedge fund alpha is the alpha generated by hedge funds, which generally work to provide alpha returns (though many operate in beta and snart beta as well).

Hedge funds are a type of investment vehicle that uses a variety of strategies to earn returns that are not tied to the performance of the stock market.

Some common hedge fund strategies include short selling and the use of leverage and derivatives.

Hedge funds are often thought of as being riskier than traditional investments because of their use of these strategies.

However, hedge funds can also offer diversification benefits because they often have low correlations with the stock market.

There are two main types of philosophies around alpha: absolute returns and relative alpha.

Absolute returns refer to the return generated by an investment strategy regardless of how the market is performing.

Relative alpha is the return generated by an investment strategy in relation to a benchmark.

For example, a fund that generates a 5 percent return in a year when the market is up 10 percent has produced positive absolute returns.

However, it has not generated relative alpha because the market outperformed it by 5 percent.

Most mutual funds will operate on a relative alpha basis given they tend to be long-only. Their value is accordingly more determined by relative performance.

Hedge funds, on the other hand, will tend to emphasize absolute returns.

For example, if the market is up 30 percent and a hedge fund returns 20 percent, is that return something to be disappointed about? It’s still 20 percent.

Likewise, if the market is down 30 percent and a hedge fund is down “only” 20 percent, it’s still poor returns even despite relative outperformance.

For that reason, most hedge funds – and most institutional investors and individuals – will focus on absolute returns over relative alpha.

Beta strategies, on the other hand, seek to match the performance of the overall market.

This is typically done by investing in a market index fund or exchange-traded fund (ETF).

With beta strategies, there is no active management. The goal is simply to achieve returns that are in line with the market.

Alpha is generated when an investment outperforms its benchmark, while beta is simply the benchmark itself.

Smart beta is a type of investment strategy that seeks to combine the best of alpha and beta.

But, instead of trying to beat the market, smart beta seeks to achieve returns that are similar to the market but with a twist.

With smart beta, the goal is to find opportunities that the market is not fully recognizing.

This can be done through factors such as value, momentum, quality, or size.

Smart beta is often seen as a middle ground between alpha and beta.

It can provide the potential for outperformance, but with less risk than pure alpha strategies.

Risk parity is an example of smart beta.

The goal is to create a portfolio that has a similar return profile to the overall market but with less volatility.

Risk parity has become increasingly popular in recent years as investors have become more aware of the importance of managing risk.

Smart beta is an investment strategy that seeks to provide returns that are not tied to the performance of the stock market.

Instead, smart beta strategies use alternative weighting methods to achieve their goals.

Equal weighting is a type of smart beta strategy that weights each component of the index equally.

This is different from traditional market capitalization weighted indices, which weight components according to their market value.

Equal weighting can provide diversification benefits because it reduces the impact of individual stocks on the performance of the index.

Fundamental indexing is another type of smart beta strategy that weights stocks according to their fundamental characteristics, such as earnings or sales.

This is different from traditional market cap weighted indices, which weight stocks according to their market value.

Fundamental indexing can provide diversification benefits because it reduces the impact of individual stocks on the performance of the index.

Minimum variance is a type of smart beta strategy that seeks to minimize the volatility of the index.

This is done by selecting a portfolio of stocks that have low historical volatility and are not highly correlated with each other.

Minimum variance can provide diversification benefits because it reduces the impact of individual stocks on the performance of the index.

Can alpha be equal to beta?

Alpha is excess returns in excess of a benchmark.

Beta is the returns of the benchmark itself.

They can be the same when alpha generated is the same as the returns of the benchmark.

Can alpha be negative and beta positive?

Yes. Alpha can be negative and beta positive when the returns of the benchmark are higher than the excess return of the investment.

For example, if a portfolio returns five percent and its benchmark returns ten percent, the alpha is negative-five percent (5 minus 10) and beta is positive five percent.

Is alpha always superior to beta?

No. Both alpha and beta are important, but they serve different purposes.

Alpha is excess return in excess of a benchmark. Beta is the returns of the benchmark itself.

Both are important because they provide different information.

Is alpha the same as risk-adjusted return?

No. Alpha is excess return in excess of a benchmark.

Risk-adjusted return is a measure of return that takes into account the risk of the investment.

It is often expressed as a ratio or percentage.

For example, if an investment has a return of 10 percent above the risk-free rate and volatility (often expressed as a standard deviation) of 5 percent, its Sharpe ratio would be 2 (10 percent divided by 5 percent).

On the other hand, if that 10 percent excess return was achieved off 20 percent volatility, its Sharpe ratio would be considered 0.5, dividing 10 by 20.

So, even though the return is the same, the former has a risk-adjusted return that is 4x better.

What should be used as a benchmark index?

The choice of benchmark index will depend on the investment objectives.

For example, if the objective is to outperform the overall stock market, then a broad-based index such as the S&P 500 would be appropriate.

If the objective is to outperform a specific sector or industry, then a more narrowly focused index would be appropriate.

Is smart beta the same as active management?

No. Smart beta is a type of passive management.

Active management is when an investor tries to beat the market by picking stocks, securities, or other tradable instruments that will outperform the market.

Smart beta is when an investor buys all the stocks in an index, but weights them differently than traditional indices.

For example, in a traditional index such as the S&P 500, each stock is weighted according to market capitalization.

In a smart beta index, the stocks may be weighted according to volatility or dividend yield.

What are the benefits of smart beta?

The benefits of smart beta depend on the specific strategy employed.

Generally speaking, smart beta can provide diversification benefits because it reduces the impact of individual stocks on the performance of the index.

It can also provide cost savings because it is a passive investment strategy.

Is smart beta a fad?

No. Smart beta is not a fad.

It is a type of passive investing that has been around for many years.

What are some popular smart beta strategies?

There are many smart beta strategies, but some of the more popular ones include:

There is no clear answer.

It depends on the specific strategy employed and the investment objectives.

Some smart beta strategies may outperform traditional indices over the long term, while others may underperform.

What are the risks of smart beta?

The risks of smart beta will depend on the specific strategy employed.

Generally speaking, smart beta strategies are subject to the same risks as traditional indexing, such as market risk and sector risk.

Some smart beta strategies may also be subject to additional risks, such as liquidity risk or concentration risk.

Alpha, beta, and smart beta are all investment strategies. Alpha refers to generating returns through active management, while beta refers to achieving returns by matching the market. Smart beta is a combination of the two.

Risk parity is an example of smart beta.

There is no clear answer as to whether smart beta is better than traditional indexing. It depends on the specific strategy employed and the investment objectives of the individual trader or investor.

Generally speaking, smart beta strategies are subject to the same risks as traditional indexing, such as market risk and sector risk, as well as potentially additional risks, such as concentration or liquidity risk.

Compete In The ForexCup Trading Championship For Your Chance To Win $50,000

The Complete Guide to Dividend Income

Why You Should Focus on Real Returns, not Nominal Returns

What Are the Long-Term Returns of Asset Classes?