The Best Brokers For Correlation-Based Trading

For trading, correlation can have many different uses, as so much of what traders do is based on analysing the relationships between different stocks, currencies and markets etc. Here, we’re going to look at how we define and employ correlation in day-to-day trading.

To find whether there’s a relationship between two variables, we use the correlation coefficient. This is a scale which runs from -1 to 1 and provides the following information:

This being a scale, there are also in-between values although, in trading, a coefficient of more than -0.8 or less than 0.8 is not considered significant. 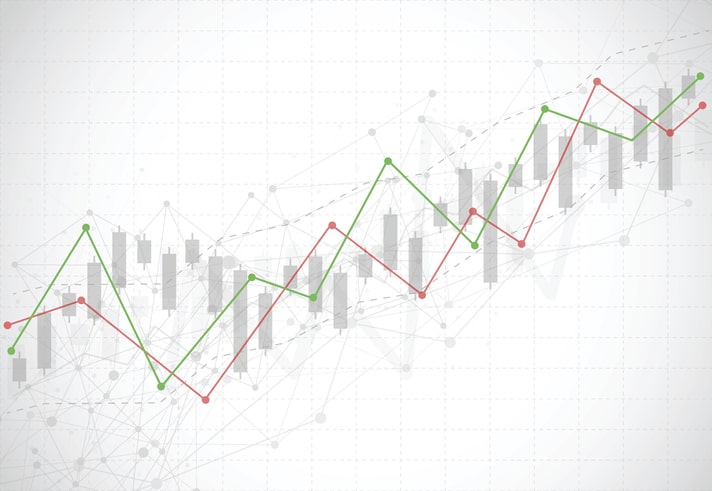 Let’s say we want to find if there is any correlation between stock A and stock B: to find the correlation, we first need to know the covariance and standard deviation of our two stocks.
In trading, covariance is the measure of the relationship between A and B. This might sound the same as correlation, but it is different (see note below).

Covariance is found by taking a set of values for A and B from a given time period and calculating each one’s mean average. The mean is then subtracted from each A and B value. The subsequent totals for A are added together and likewise with B. The sum of these A and B values is multiplied and then divided by the number of values you started with minus 1 (so if you took the values of A and B once a day over a ten-day period, you’d divide by 9).

Standard deviation in trading is a measure of how far the value of a security varies from its mean average over a given period of time.

To find the standard deviation, you first need to know the variance (different from covariance): this is calculated by taking the values of one stock, A, over a given time period. As with covariance, the mean average of A is worked out and then subtracted from each value.

Each of these totals is then squared and added together. This total is then divided by the original amount of values minus 1 to give you the variance. The square root of the variance is the standard deviation.

The correlation coefficient is found by dividing the covariance of A and B by the sum of the standard deviations of A and B.

Difference Between Correlation and Covariance

The subtle but important difference for traders between correlation and covariance is thus: covariance only measures the rate at which two values change in tandem whereas correlation measures the extent to which these value changes are related. When these are seen plotted on the same graph, correlation will tend to stay closer to the mean than covariance.

Pros and Cons of Correlation

As with anything in trading, the correlation coefficient has its advantages and disadvantages:

Now we know what correlation means for traders, let’s look at ways in which it’s employed in everyday trading:

The main reason any trader would want to know the correlation between two variables is ultimately to inform their investing.

An interesting example of this is the correlation between stocks and bonds, particularly those of the S&P 500 and US Treasury bonds. Since the turn of the century, these two asset classes have been almost consistently negatively correlated.

Two decades of negative stock-bond correlation have given rise to the assumption that as stocks increase, bonds will always drop as investors seek to free up capital to take advantage of bull markets. The reverse is also deemed to be true; in a bear market, investors can look to bonds as a way of protecting their portfolio (this is sometimes referred to as a ‘flight to quality’ or ‘flight to safety’ – more on this below).

Traders want to guard their assets as much as possible against systematic risk – i.e. factors that affect a large section of a market, if not the whole market. Popular ways of doing this are portfolio diversification and portfolio protection.

Both of these employ correlation by including securities which have either low or no correlation to equities. Low and non-correlated assets are also referred to as alternative investments and can include private equity, precious metals and options. The thinking is that by balancing a portfolio in this way then, should one set of equities suddenly depreciate in value, the low correlated securities won’t be as badly affected as the equities and therefore help hedge any losses.

Other Trading Strategies Which Employ Correlation

Pairs trading looks for two securities which are historically highly correlated (a coefficient of 0.8 or above) and seeks to capitalise on any diversion from their correlation.
The strategy was developed at Morgan Stanley in the 1980s.

Correlation swaps are over-the-counter (OTC) financial derivatives. Essentially a correlation swap is a contract which promises a return for every increase in the correlation coefficient between two products. As with pairs trading, an ideal correlation swap would be based on two highly-correlated securities that have deviated a distance from their mean.

Dispersion trading is a complex trading strategy. It works on the idea that the difference between the implied and realised volatility of an index tends to be greater than that of its component stocks. In theory, profit is made by selling index options and buying options in its individual parts.