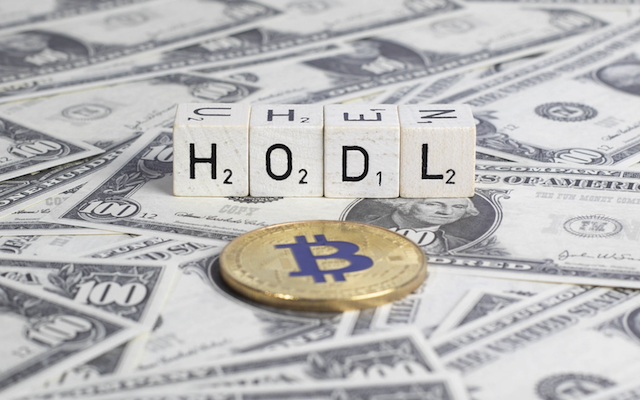 HODL typically refers to holding onto your bitcoin or cryptocurrency rather than selling it. The term was first coined on a Bitcointalk forum in 2013 by a user who goes by the name GameKyuubi.

It was first used as HODLING, which was an inadvertent misspelling of “HOLDING”.

It has also commonly come to stand for “hold on for dear life” within the crypto community.

HODL has since become a meme within the bitcoin community and is often used to describe someone who is holding bitcoin for the long term.

Though it started as a reference to bitcoin, it has since been used to refer to holding onto any cryptocurrency or stock (usually a volatile meme stock).

‘HODLing’ as a way to avoid panic selling

HODL is often used as a way to encourage others to hold onto their bitcoin, even when the price is dropping.

HODLing can be seen as a way to avoid the effects of panic selling, as well as a belief that the price of bitcoin will eventually go up regardless of temporary market fluctuations.

There are a few variations of HODL, such as BUIDL (which refers to building new cryptocurrency projects and contributing to the blockchain) and HOLD (which is simply holding a cryptocurrency or stock).

HODL as a Trading Strategy and Investing Philosophy

HODL has since morphed into a broader strategy and trading or investing philosophy.

Of course, this is nothing new, as it’s generally been widely considered a good thing to not sell assets when they fall (unless there’s a valid reason for doing so, such as a more than commensurate loss in future earnings).

This is HODLing in a nutshell – holding an asset during price declines in order to buy it back at a lower price and thus profit from the difference.

It’s important to note that HODLing isn’t just about bitcoin or crypto, but can be applied to any asset.

And while HODLing may seem simple, it can actually be quite difficult to do in practice.

This is because humans are loss averse, which means that we feel the pain of losses more than we feel the joy of gains.

This psychological phenomenon is what causes people to sell when prices fall, even though HODLing would have been the better move. The psychological aspect is part of what makes trading so difficult.

By and large, HODL is not so different from the standard “buy and hold” strategy.

Trading a lot can also induce:

HODLing is most commonly associated with bitcoin and other cryptocurrencies, but it can also be applied to stocks.

In fact, HODLing stocks may even be a better strategy than HODLing cryptocurrencies, as stock prices are generally much less volatile.

If we compare the S&P 500 (via the SPY ETF) to bitcoin (via the GBTC ETF), we can see that bitcoin’s annualized standard deviation is about 9x higher than that of stocks.

Of course, there are no guarantees in the stock market either, but “HODLing” stocks may be a less risky proposition than HODLing cryptocurrencies.

HODL ($HODL) is a cryptocurrency that was created as a way to encourage people to, well, HODL it.

Launched in May 2021, HODL is a DeFI token created on the Binance Smart Chain (BSC).

HODL incentivizes users to hold onto their tokens for rewards in the Binance coin (BNB) that are distributed every three days (analogous to a dividend).

The rewards are generated from taxes collected on user transactions, such as the sale, purchase, or transfer of HODL tokens.

These taxes are converted into BNB tokens and a percentage of them are redistributed back to users from the collective liquidity pool.

What’s the difference between HODL and a “buy and hold” strategy?

There is no difference between HODL and buy and hold.

They are both trading or investing strategies that involve holding an asset for the long term.

What’s the difference between HODL and HOLD?

HODL is a misspelling of HOLD.

HODL has become a meme within the cryptocurrency community and is often used to describe someone who is holding bitcoin for the long term. HOLD, on the other hand, is simply holding a stocks or perhaps another cryptocurrency.

HODL coin is a cryptocurrency that was created as a way to encourage people to HODL it.

Launched in May 2021, HODL is a DeFI token created on the Binance Smart Chain (BSC).

What is Daily HODL?

What is Hodl Hodl?

When is HODL not a good idea?

There is no universal answer to this question, as HODLing may not be a good idea in certain circumstances.

For example, if there is a valid reason to sell an asset (such as needing the money), then HODLing may not be the best strategy.

And while HODLing may seem simple, it can actually be quite difficult to do in practice.

This is because humans are risk-averse, which means that we feel the pain of losses to a greater extent than we feel the joy of gains.

This psychological phenomenon is what causes people to sell when prices fall, even though “HODLing” (or buy and hold) may have been the better move.

HODL is a trading or investing strategy that involves holding an asset for the long term.

HODLing may seem simple, but it can actually be quite difficult to do in practice due to loss aversion, a psychological phenomenon that causes people to sell when prices fall.

HODLing may not be the best strategy in every circumstance, but it can be a good way to weather short-term volatility and maximize gains in the long run.

Those looking for a less risky HODLing strategy may want to consider HODLing stocks or other assets instead of cryptocurrencies.