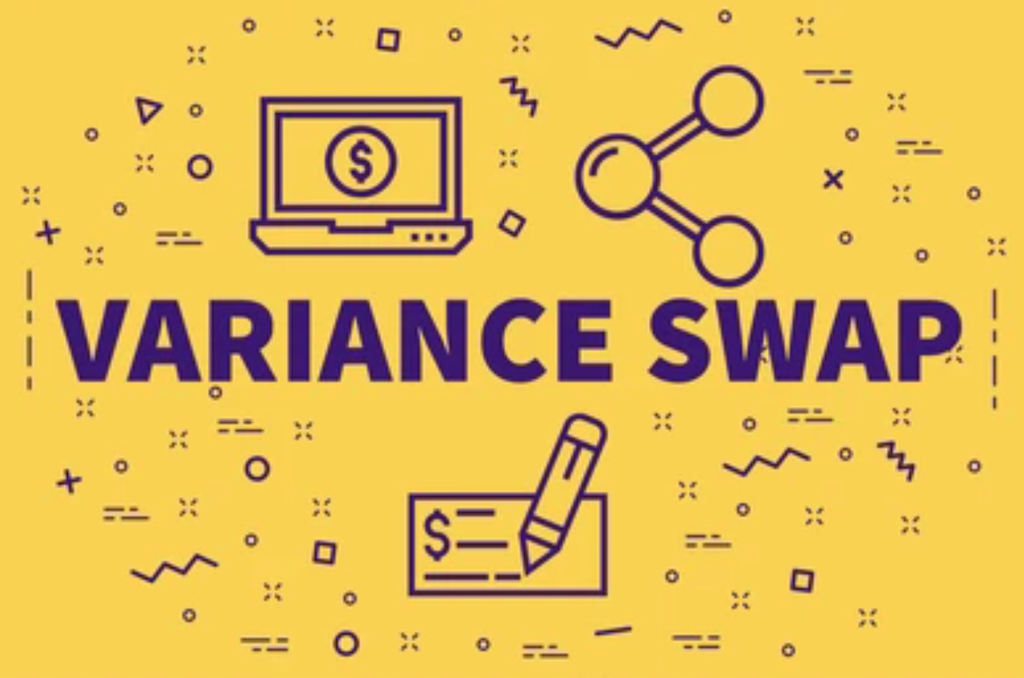 Variance swaps are an OTC financial derivative used to hedge risks and/or speculate on a movement in the price of a certain asset or index, volatility, interest rate, or exchange rate.

One leg of the swap pays an amount based on the realized variance of the price changes (as it pertains to the underlying asset, index, etc.). Because this is unknown ahead of time, it pays what’s called a floating rate.

Price changes are typically characterized as log returns, which are captured on a daily timeframe based on some agreed-upon closing price (e.g., such as the 4 PM EST close of a US stock).

The other leg of the swap pays a fixed amount. This amount is known when entering the deal.

The net payoff to those involved in the deal will be the difference between the fixed amount and the floating amount at the end of the deal.

This is much like a standard vanilla option when the premium is known once entered and the final payout is determined at expiry.

Like vanilla options, the variance swap is settled in cash at expiration. Occasionally, cash payments are made at some interval for purposes of maintaining adequate margin.

Structure of the variance swap

Swap payoffs are based on a notional amount that isn’t exchanged.

For a variance swap, this notional amount is based on vega (which is the sensitivity of the underlying asset’s price to volatility). This is then used to convert the payoff into a tangible monetary amount that exchanges hands.

Variance swaps are used by a number of different types of market participants.

Hedgers use them to protect their portfolios from fluctuations in the underlying security, index, etc.

They do this by taking on the other leg of the swap, receiving a fixed payment in return.

Speculators use variance swaps to profit from changes in volatility or movements in the price of the underlying asset, index, etc. They commonly take on the first (paying) leg of the swap and receive the floating rate payment.

Moreover, arbitrageurs may try to use variance swaps to profit from pricing discrepancies between two different markets or products. They would enter into one variance swap with each leg paying a different rate. In this way, they capture the difference between the two markets.

Banks in particular use them in order to make a profit on the funds they hold.

The swap doesn’t cost anything to enter into and no funds are actually exchanged until maturity when they can pocket that difference. Variance swaps also allow banks to keep certain assets off their books without worrying about price fluctuations hitting profitability metrics like return on equity (ROE).

Variance swaps can therefore provide banks some additional flexibility and help them avoid showing large hits to their financial performance during an economic downturn when asset prices slip.

Variance swaps for speculating on volatility

Options are commonly used to speculate on volatility.

However, options are muddied by the fact that they have a delta (price) component as well.

So, vanilla options, while ubiquitous and liquid, don’t have the purity that certain kinds of swaps can provide.

If one wanted to use options to speculate on volatility, then it would be necessary to delta hedge to remove the price/directional risk.

And delta hedging is difficult to do given it’s a continuous process – price is always moving, which means dynamic hedging.

Swaps strip out the delta component. So, one’s left with a pure bet on volatility if that’s the idea.

A variance swap would also require several options (often called an options strip), not just one or a few.

Then, to keep the current price centered on the underlying asset, this would require consistently rolling this options strip to the desired position.

Transactions costs can come into play in this scenario in a big way. So pure volatility trading with vanilla options isn’t convenient.

Variance swaps represent a pure bet on the volatility of the asset’s underlying price, which is more efficient than having to deal with using standard calls and puts and their delta risk.

This way, the profit and loss from the variance swap is a pure bet on the difference between implied volatility and realized volatility.

Moreover, some traders like the fact that the payout of the variance swap is based on realized variance.

Implied variance is, over the long run (as shown historically), higher than realized variance. This is because volatility sellers expect to be compensated for taking on a negative convexity position.

In other words, their upside is fixed (getting paid the premium) while the payor long volatility has theoretically unlimited upside.

This is known as the variance risk premium and is analogous to the volatility risk premium when it comes to vanilla options.

It also creates a potential opportunity for volatility arbitrage in the form of a short variance trade continuously rolled.

A conditional variance swap is a type of derivative that gives a trader exposure to the volatility of an underlying product only when it’s within a pre-specified range.

Why would a trader want exposure to a conditional variance swap?

A conditional variance swap is useful when a trader has complex or more nuanced volatility exposures.

The use of a conditional variance swap could be an expression of, for example:

However, variance swaps often deviate from the prices associated with replicating the trade with vanilla options.

Part of this may stem from the fact that replicating the trade with vanilla options may require a larger amount of OTM options, which may have wider spreads than those closer to ATM, causing the price differential.

Conditional variance swaps limit the pricing disparity by only hedging strikes within a certain range.

In other words, volatility exposure is limited to when price (or whatever the variable) stays within that channel.

The advantage comes in the form of limiting transactions costs and the total cost of managing a large number of options. This eases any hedging burden required.

For receivers (selling variance), there’s a positive net payoff if realized variance is less than implied variance by the expiration date.

This is an advantage over vanilla options and non-variance swaps that don’t allow these specifications. Accordingly, they are a popular derivative among volatility traders. Their use typically increases during times where implied volatility is elevated and/or trending higher.

A corridor variance swap is essentially the same thing.

A corridor variance swap is usually designed with two prices or variables that specify a range.

The swap remains valid so long as it stays within that range or corridor.

If the price of an asset (or whatever the variable) moves outside of a given range, either up or down, both variance nodes are invalidated and no longer contribute to the variance amount.

Variance swaps of this character (and variance swaps in general) are often uncorrelated with asset prices, which make them an effective tool for hedging other positions in a portfolio or having it as its own return stream for speculation purposes.

A variance risk premium is the difference between implied variance and realized variance.

For example, if historical variance in a market is 15 percent and implied variance is 16 percent, the variance risk premium is one percent.

In order to estimate implied volatility from realized volatility, a trader would need to know the expected value of the variance risk premium.

This is difficult because the variance risk premium is not a static number; it changes over time.

Some traders believe that the variance risk premium is mean-reverting. In other words, they believe that when realized volatility stays high or low, the more likely it will be to revert back to its average value.

This stems from the idea that the nature of markets tends to be pretty consistent over time.

US stocks have mostly had the same variance/volatility going back over 100 years.

For individual stocks, this might vary as the company evolves – for example, an unprofitable, fast-growing company during its early days public to a mature, consistent cash producer decades later.

There are a few different ways to estimate the variance risk premium:

Each method has its own pros and cons.

Historical volatility is usually the most common way to estimate the variance risk premium because it’s relatively straightforward to look up or calculate.

Many traders believe that it provides a rough estimate of future variance. This is usually correct over the long term, but it can potentially differ substantially over the short term. Variance can be very low or high relative to expectations.

Market-specific products, like VIX derivatives as it pertain to US equities (specifically the S&P 500) have been gaining popularity as a way to project future variance risk premiums.

The VIX, as the most popular S&P 500 volatility product, has been in effect since January 1990.

Are variance swaps only for institutional traders? Can retail or individual traders trade them?

A retail or individual trader can trade volatility through options, but a pure volatility bet would involve hedging out the delta (directional) risk.

Given that price is always moving, markets gap, you can’t always monitor markets, and so on, executing delta hedges to maintain an approximate volatility bet can be difficult as well as costly from all the transactions that may need to take place.

Related products to variance swaps include the:

Variance swaps are a type of swap that allows traders to bet on the difference between implied and realized volatility.

They are a form of derivative that strips out the pricing component of vanilla options and focuses on the volatility component. They enable both negative and positive convexity bets on implied volatility over a certain time horizon.

Also, they can be used to speculate on volatility or to hedge an existing position or as part of a correlation trade.

Within institutional portfolios, variance swaps can be an important tool for hedging and speculating on volatility. They have become popular among traders because their ability to provide conditional exposure to underlying price movements

Variance swap prices contribute to exhibiting skewness, which can be an advantage or disadvantage depending on the inclinations or strategies of the individual trading them.

Trading variance swaps is possible in many markets with banks underwriting derivatives in markets like futures, forwards, currency pairs, equities, and so on.

The market is not anywhere near as large as the market for vanilla options. So for arbitrageurs, there is not always an opportunity to make profits by doing arbitrage trades in the underlying product priced against these derivatives or in other derivative markets.

Variance swaps help tame this liquidity gap through their use as a medium of exchange between parties that have opposite views on future realized variance or differing needs based on the unique circumstances regarding their portfolios or businesses.

Is Oval X Shutting Down?