China’s economy will naturally slow over time. Its population is already older. Its productivity will still rise faster than western developed economies as plays catch-up and its per-capita incomes get more in line. But a lot of growth that was fueled by credit will start to slow.

But China’s growth correlation with other emerging markets is weakening. Not so long ago most economies were growing in close step with China.

But in recent years those links weakened, then fell dramatically during the Covid-19 pandemic.

Most notably, the correlation between gross domestic product growth in China and other emerging markets fell since 2015. The correlation went from nearly one-to-one (over +0.9) to only a mild correlation (under +0.2).

The FT provided a convenient graphic showing the rolling five-year correlation between China’s quarterly growth and that of other emerging market economies. 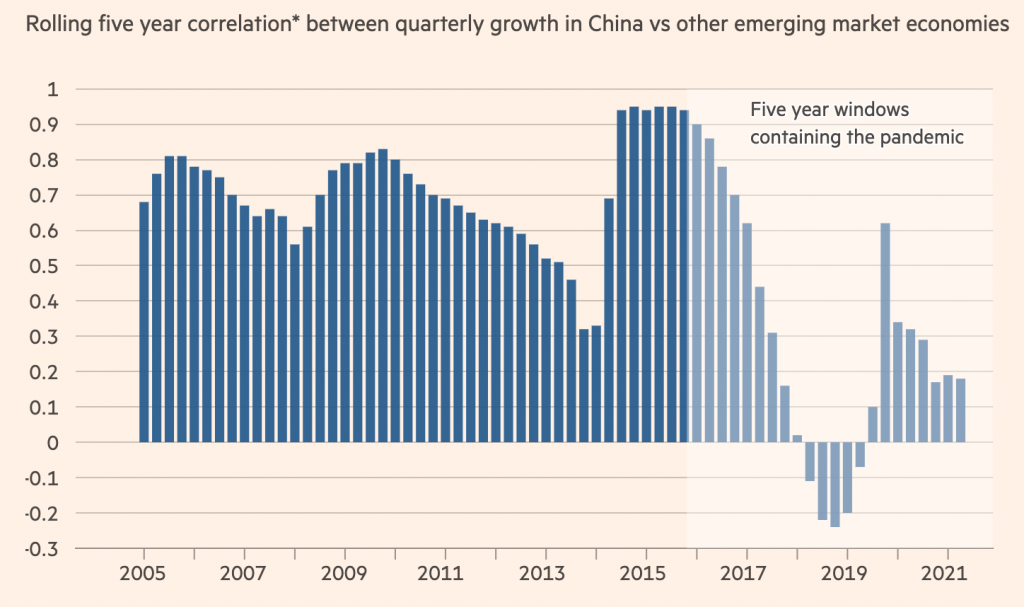 In 2021, for example, still a pandemic year (but most known for recovery in terms of economics and markets), China grew significantly slower than other emerging markets for the first time since the early 1990s, which may be a sign of things to come.

China’s economic restructuring has continued where exports as a percentage of GDP continue to fall, going from 35 percent in 2006 to under 20 percent today.

Much of this is secular. Most economies turn toward domestic consumption as the primary driver of economic growth as they go from manufacturing to services.

But some of it is contributed from economic decoupling from western economies. Though former US President Donald Trump was widely criticized for his approach toward trade with China, President Joe Biden and his critics in Europe have largely taken on the same set of policies.

For traders and investors, this means increasingly a bet on emerging markets is not the same thing as a bet on China.

There is more diversification value in trading and investing in a wider range of countries and not feel like you’re essentially making the same bet.

Is Oval X Shutting Down?