A bear trap in financial markets is when a security, or a market as a whole, experiences an extremely sharp decline but eventually reverses.

Typically, these drops are sudden and steep, resulting in heavy losses for investors holding the affected assets.

In some cases, bear traps can be caused by market speculation or news events that have a significant impact on the price of a security.

For example, if negative news is released about a company’s products or financials and traders anticipate further declines in its stock price, they may short-sell the stock to profit from it.

This can result in huge losses for those who held onto their shares too long before hearing about the news.

To avoid falling into a bear trap in markets, investors should always remain informed about changing economic conditions and news related to the securities they own.

A bear trap is short-term bearish but long-term bullish.

It is a technical pattern that is formed when an asset price drops sharply below the previous low, only to suddenly reverse and rally.

It often occurs when there is significant bearish pressure on the security or market but strong underlying support from buyers.

In such cases, investors who are able to identify this pattern can capitalize by entering a long position in the security before it experiences its recovery.

However, due to its volatility, traders may need to take extra caution while trading based on this pattern as it could potentially result in losses if they enter at the wrong time.

This type of market behavior can be seen in many different financial instruments including stocks, commodities, cryptocurrencies, and even currencies. Investors must remain vigilant and always be aware of potential bear traps.

A bull trap is the opposite of a bear trap in that it occurs when an asset price moves sharply higher and then just as quickly reverses, resulting in losses for those who went long.

Unlike a bear trap, which is characterized by a sudden reversal after dropping below the previous low, a bull trap tends to form near resistance levels or at times of overbought conditions where there is limited further upside potential.

As with bear traps, traders should be cautious when entering positions based on this pattern, as it can easily result in losses if the reversal is more severe than expected. 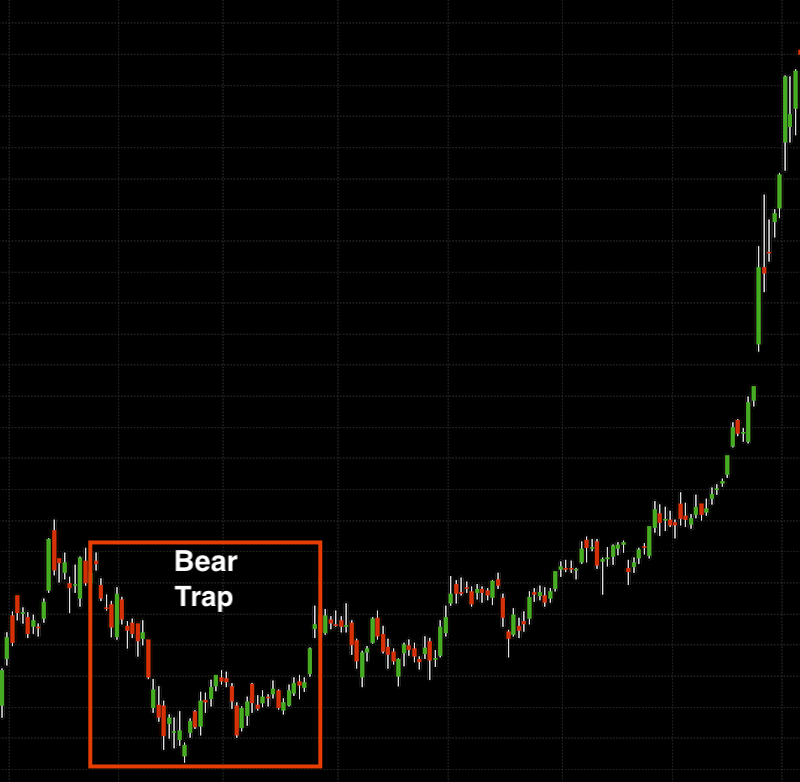 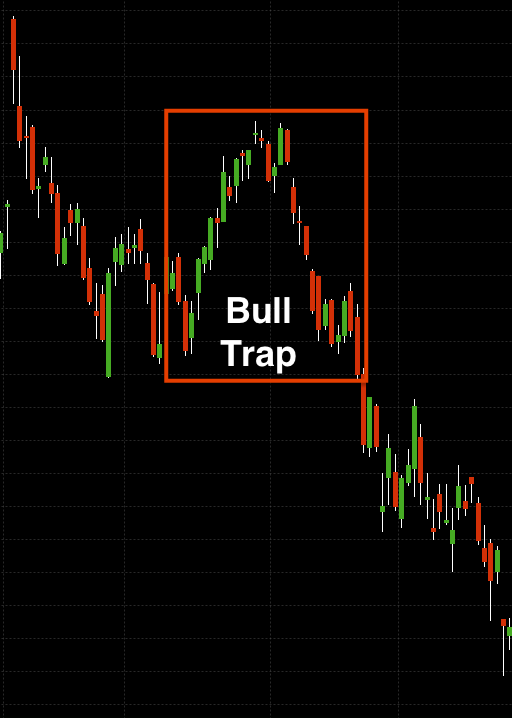 What Causes a Bear Trap?

Bear traps can be caused by a variety of factors including overbought conditions, speculation, and news events.

The most common cause is when speculators anticipate an asset’s price to drop and then short sell the security, driving the price down temporarily.

Bear traps often attract what are commonly known as “tourist shorts” – those who expect a fall after seeing signs of weakness in a security.

Other causes may include changes in market sentiment or news related to the security that has a significant impact on its price. In some cases, bear traps may also be caused by technical indicators such as sudden breakouts from support or resistance levels.

What Causes a Bear Trap to Reverse?

The reversal of a bear trap occurs when buyers enter the market and purchase the asset at the lower price, pushing its value up again.

In some cases, this may be caused by short sellers who are covering their positions in order to prevent further losses (i.e., a short squeeze).

Other drivers for bear trap reversals can include news events or other catalysts that improve so-called sentiment from investors.

It is important to note that reversals may not always happen immediately after a bear trap forms – it could take some time before bullish momentum builds enough for an upward trend to form. Every situation is unique.

Of course, there is no guarantee that a bear trap will reverse; traders should exercise caution when entering positions based on this pattern as heavy losses could result if their timing is wrong.

Example of a Bear Trap

In 2019, Tesla (TSLA) became dangerously low on cash, as it has many times in its history.

The market gained wind of this development and many began shorting the stock, believing they could make quick profits if the company ran out of cash and couldn’t raise capital (i.e., would go bankrupt).

The year before, CEO Elon Musk had been charged with securities fraud by the SEC for lying about a buyout of Tesla in the middle of the trading day. Accordingly, Tesla’s WKSI status and ability to raise capital was unknown at the time.

Musk told investors that Tesla would have 1 million robot axis on the road by 2020. This never happened, but it was successful in helping Tesla raise the capital to keep going.

What is a bear trap in finance?

A bear trap is a technical pattern that occurs when the price of an asset appears to be breaking downwards, only to reverse and return upwards again.

This can lead investors to believe that the trend has reversed and resume or add to their long positions, in the process trapping those who have taken bearish positions.

Why is it called a bear trap?

The phrase “bear trap” is derived from the fact that it often traps bearish investors who have taken short positions in an asset.

What are some general examples of bear traps?

One example of a bear trap is when an asset appears to be declining, only for the price to rally and reverse the original trend.

This can lead traders to believe that the downward trend has reversed and they start entering long positions, trapping those who held onto their shorts.

Another example is when a period of high-volume trading sets up a false break of support levels which causes prices to temporarily dip before bouncing back up.

This can create a situation where those hoping for further downward movement get “trapped” in their positions as prices rise.

A bear trap is a technical pattern in the financial markets that can lead to investors being “trapped” in their positions after believing that an asset’s price will continue to decline.

It usually occurs when prices suddenly reverse direction and go up again, trapping those who had taken a short position expecting the price to keep going down.

Bear traps are often caused by changes in sentiment or news related to the security, as well as technical indicators such as false breakouts below believed support levels.

Reversals of bear traps occur when buyers enter the market and purchase the asset at its lower price, pushing its value back up.

Investors should be cautious when trading around bear traps due to the unpredictable nature of the market, and the potential for large losses if the reversal does not materialize.

Overall, bear traps can be an opportunity to make money as long as investors are aware of the risks associated with them.

An Opening For US Bond Bulls?

Poker vs. Trading – How Poker Can Help in Trading the Markets

Plus500 Expands Its Footprint In The Middle East With DFSA License

Will Binance Be The Next FTX?