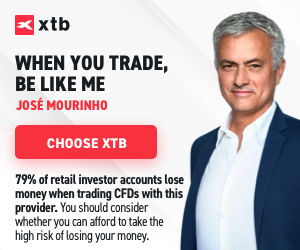 XTB have teamed up with football management legend José Mourinho to promote the brand across the globe. The self styled ‘Special One’ encourages traders to trade, invest – and win.

The new advertising campaign prompts traders to ‘Be Like José – and trade with XTB. It is a well trodden path for brands to sign up well known celebrities – especially from the world of sport – but the trend has normally been for current players or teams.

Most of the leading European football clubs have ‘official trading partners’ or similar, here are just a few examples:

Plus500 – Atletico Madrid and Slavia Prague

…but XTB have decided to team up with a football coach rather than a player.

The focus on the more cerebral element of sport seems a better fit for trading than the athletic. So this tie-in with Mourinho could prove fruitful.

The Portuguese coach is renowned for his shrewd tactics, man management and even mind games. Certainly an interesting mix of skills to compare to day trading.

XTB offer a solid all round experience for traders and are expanding their operation across Europe and the globe.

This advertising campaign will doubtless be seen across the print media, TV and internet over the coming months, and introduce a new audience to the brand.

The ads will run in multiple languages, so the campaign is not purely for UK based football fans. José Mourinho has coached teams across Europe – in Portugal, England, Italy and Spain – and his appeal to potential customers does not stop there.

Thanks to his epic record of trophies, and the popularity of European football in ever corner of the globe, Mourinho is recognised anywhere on the planet. XTB will doubtless grow their business accordingly and become one of the most well known brokers in the industry.

Sorry, there are no matching brokers for your criteria and location (United States). You can see the list without the location filter.

Review
Please note that CFDs are complex instruments and come with a high risk of losing money rapidly due to leverage. 71% of retail investor accounts lose money

SPAC: What Are ‘Blank Check’ Companies?

71% of retail investor accounts lose money when trading CFDs with this provider. You should consider whether you can afford to take the high risk of losing your money.